The requirement for an occupier to give up the premises with ‘vacant possession’ is often found within the yield up or break clauses and has potentially serious implications.

In a 2011 Court of Appeal case NYK Logistics (UK) Limited vs. Ibrend Estates BV [2011] EWCA Civ 683, an occupier was deemed to have failed to comply with break clause provisions, and subsequently their lease continued. Lord Justice Rimer gave guidance as to what is meant by the requirement to give up a premises with ‘vacant possession’;

“….the moment that ‘vacant possession’ is required to be given, the property is empty of people and that the purchaser is able to assume and enjoy immediate and exclusive possession, occupation and control of it. It must also be empty of chattels, although the obligation in this respect is likely only to be breached if any chattels left in the property substantially prevent or interfere with the enjoyment of the right of possession of a substantial part of the property.”

This can be broken down into two tests. These are independent of each other, and a landlord would only need to demonstrate one test in order to frustrate an occupier’s break;

Test 1 – Has the Occupier Moved Out?

The property must be empty of people including employees, security and facilities management personnel. The landlord or purchaser is able to assume and enjoy immediate and exclusive possession, occupation and control of the premises.

Test 2 – Has the Occupier Substantially Removed All Chattels?

The property must be empty of chattels where these substantially prevent or interfere with the enjoyment of the right of possession over a substantial part of the property.

In 2016 case Riverside Park Limited versus NHS Property Services Limited (2016) EWHC 1313 (Ch) the court ruled that occupier installed internal non-structural partitions were deemed to be chattels. The reason given was that they could be removed without damaging the premises and had been installed by the occupier for its own benefit rather than adding value or improving the premises.  The judge then went on to rule that not only were they a chattel but they also represented a physical impediment as the landlord should be entitled to market the property in open plan rather than in a cellularised layout.

We explore these issues in more detail in our Vacant Possession Briefing Note; 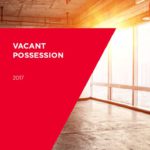